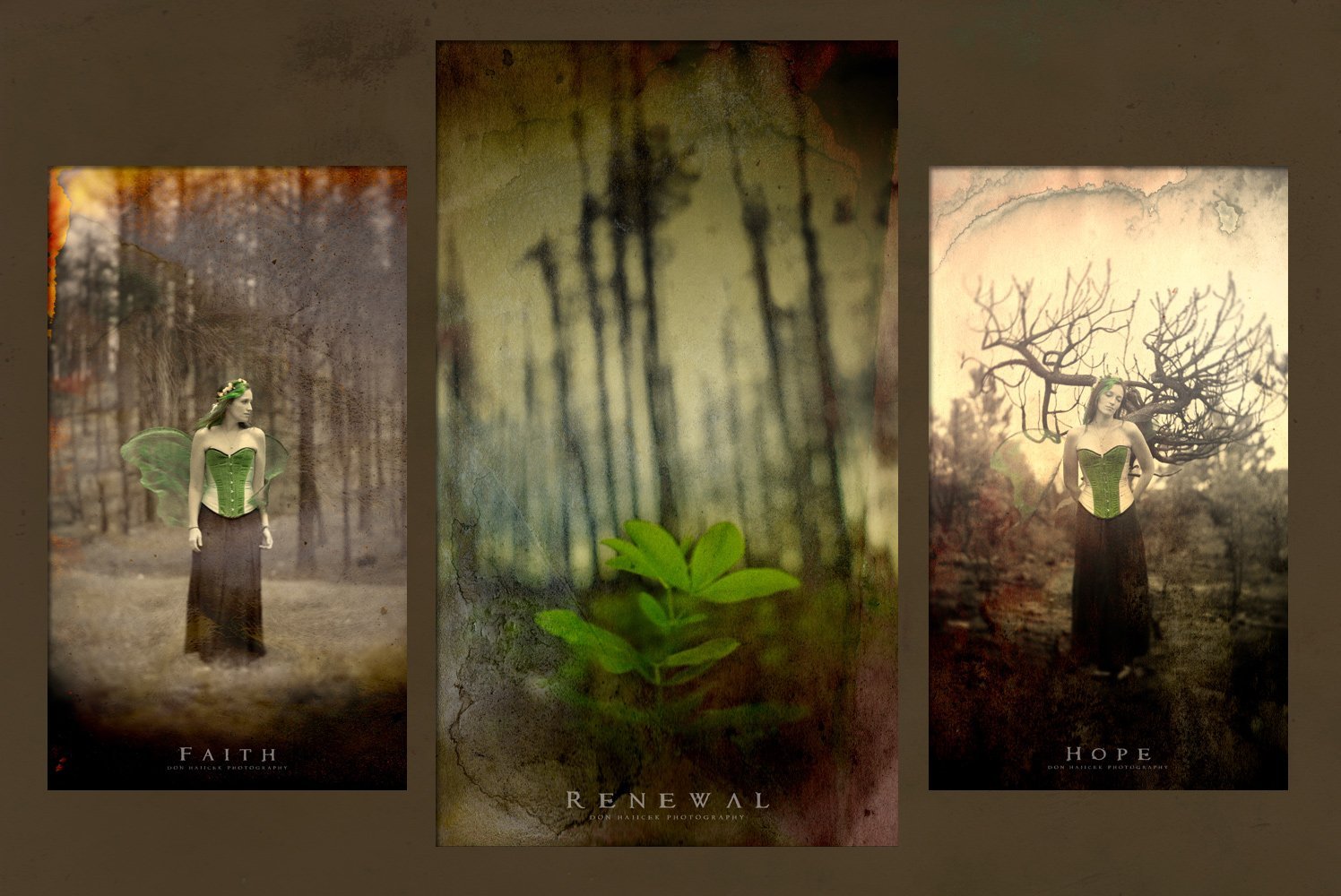 I’d been hired by a local magazine to take photos of the devastation left behind by the many wildfires that plagued Colorado in the summer of 2011. I didn’t need to drive far into the mountains before I found myself surrounded by 360 degrees of burn area. I parked my car and began taking photos. The world around me looked like and alien landscape. As far as the eye could see in every direction—up and down the sides of the mountains—were 40 foot tall burnt black matchsticks where the trees had been. They stabbed skyward from the thick black ash that covered the ground, and it seemed all the color had gone from the world.

But as I was taking photos, I got low to the ground to change my perspective, and what I found was life. Bursting up from the ash were these little green sprouts, shoving their way through the ash to reclaim the forest. The fire was not the end.

What I realized in this moment was that there is no amount of devastation in this world that and suppress inherent beauty. This is true of the forest, but this is also true of people.

Armed with this truth, I decided that I wanted to create artwork around this theme, and I wanted to use this artwork to raise funds to help rebuild homes that had been lost in the fire.

I went home and began looking through my Facebook friends to see who I thought might be a good fit for this project. As I did this, the name Susan popped into my head. Who was the model named Susan that I knew?

Well, I didn’t actually know Susan. I’d met her online six years prior to this. She wanted to get into modeling and she wanted me to help her. It was one of those things that, for one reason or another, never happened. We became that odd breed of Facebook friends that never interacted and had never met.

But for reasons that would become profoundly clear later, she was in my head for this project. This was the Divine in action.

And so I contacted Susan and told her about my ideas for the artwork. She surprised me by saying she had no interest in participating. After a bit of prodding, she told me why.

Susan said that since we’d spoken six years earlier she’d been in a motorcycle accident that left her with injuries that left her unwilling to be photographed.

Of course when she told me this I thought “She MUST be in this artwork.”

After a long conversation in which I convinced her that she was safe, and that she could trust me, Susan agreed to try.

We met a few days later, and I must say that my initial thought was “what injuries?” She had no scars that I could see, but then I’d never seen her in person before. I knew from previous work with people who’d been injured that even subtle changes in appearance can make a person feel as though they’ve been deeply scarred if the changes are the result of sudden trauma.

On the drive up into the mountains, Susan became very nervous and quiet and truly disturbed. She was trembling. As we began working, Susan was stiff and distracted. I’m used to barriers and armor with my clients, and the shaking, trembling, and sometimes even tears that come along with removing the armor, so we just kept going. We arrived in a particularly scarred part of the forest, and quietly created beautiful artwork.

Susan really seemed affected by the process. The final images made her smile with sweet mystery, like she had a secret. She remained quiet about our day together.

A few months later, I received a phone call from a woman who’d seen the artwork online. She told me that she’d lost her home in those fires, but that she was rebuilding her home up from the ashes. She was having a party to celebrate the rebuilding when it was completed, and she wanted that artwork on her walls.

I was happy to donate the artwork.

The home was rebuilt, she had her party, and it was a huge success. I posted this story on Facebook, knowing that Susan would see it and hoping it would make her proud. It had then intended effect.

Here was Susan, who didn’t want to be in front of the camera for fear of her scars, now forever enshrined on the walls of this rebuilt home.

At the time, I had just begun my career in public speaking, and I asked Susan for permission to tell this inspiring story. I still had nagging questions about her motorcycle injury, and I wanted to make sure I had the facts right.

“There was a motorcycle accident,” Susan confided “but it wasn’t the reason I didn’t want to be in the photos.”

“Don,” she continued “working with you up in those mountains allowed me to reclaim my body from the years of abuse I suffered as a child. I was a Phoenix from that fire.

Susan’s wounds were not the result of a motorcycle accident. They were much deeper, much more profound, and much more difficult to see that anything than I’d expected.

There is no amount of devastation in this world that can suppress inherent beauty.

I’ve seen and heard a lot in the last decade of working with women, and I know there is much room in this world for surprises—and miracles.