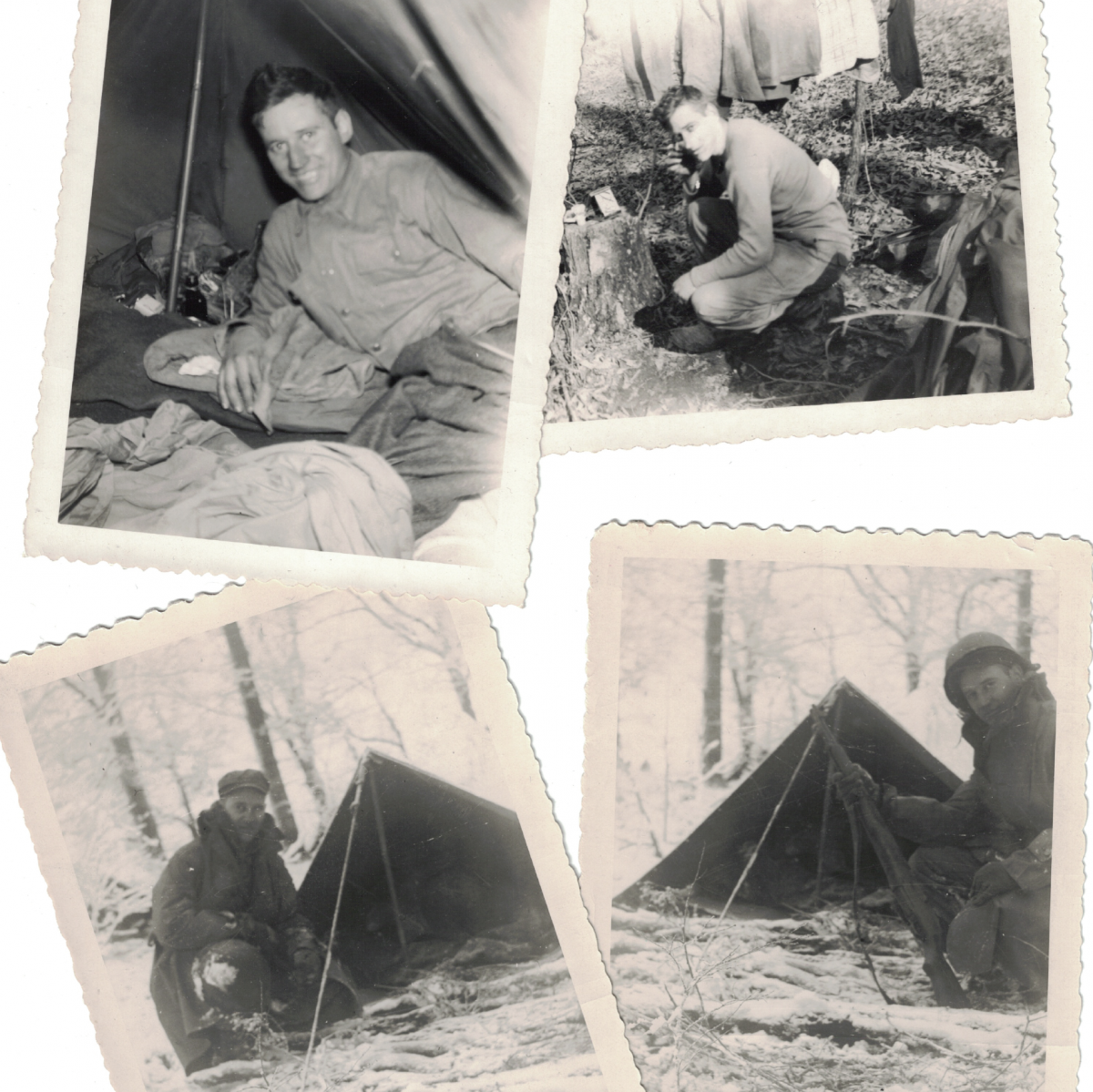 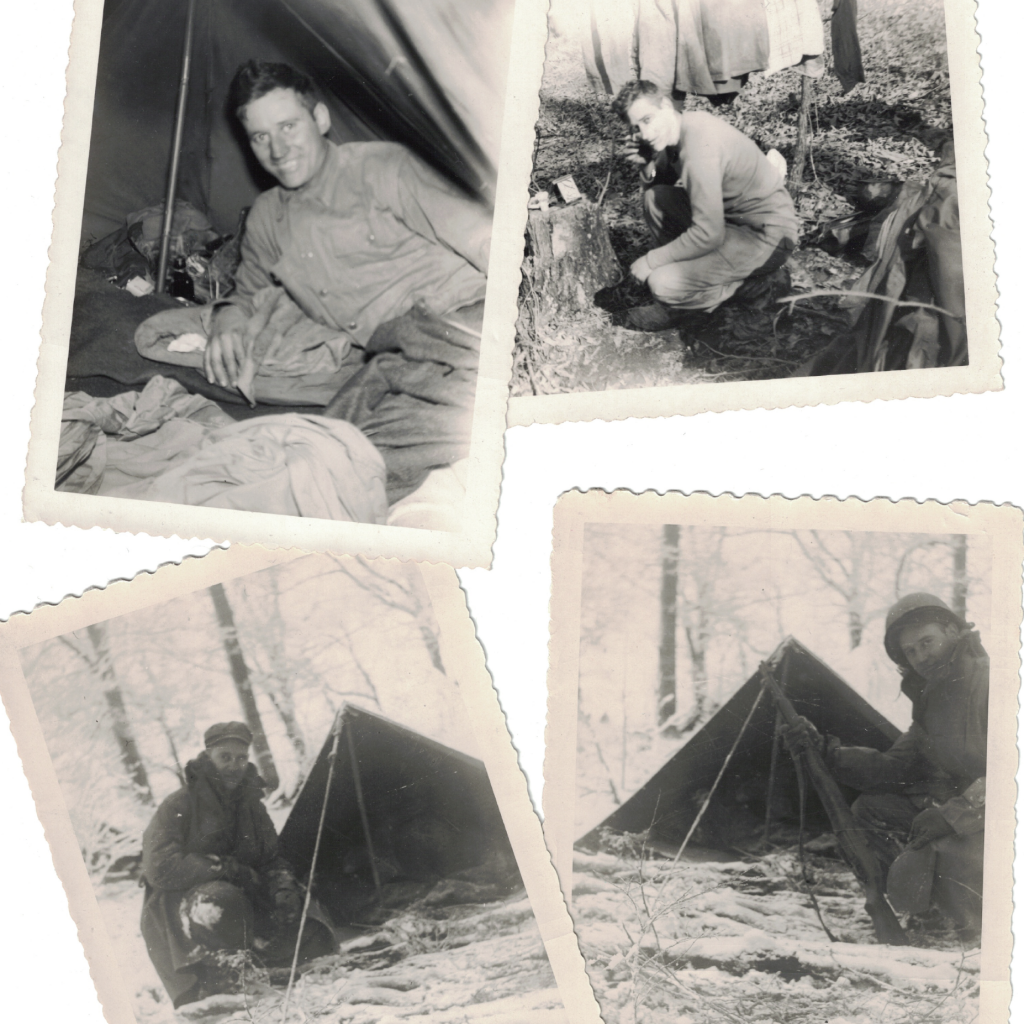 (This story originally appears as a chapter in Don’s book, “Being Seen: Witnessing the Feminine Through the Lens of Love.“)

I squinted at the young soldier in the photo, longing to know him.

Fear defined his features and gave him shape, but it wasn’t the expected fear of what may come. This was the thick, clinging fear of what is and it covered him from head to toe. It smeared across his army uniform and sucked at his combat boots. The heavy bandoliers slung over his shoulders pressed him down into a blurry, black and white world. Exhausted, he furrowed his brow and looked up, hair slick and black with dripping rain. One of his buddies snapped the picture.

I turned it over in my hands.

I put the photo back in the straw-colored tweed box, and lit a joint.

“I’ve seen this box before,” I thought.

I closed my eyes and exhaled.

My mind floated to the day—probably about eight years earlier—when I first found the tweed hatbox with the brass clasps.

With my active imagination and penchant for exploration, I was never bored as a child. My usual solo adventure consisted of avoiding the carpet in the living room, which was after all, molten lava, bubbling and raging and waiting to consume me if I dare touch it. And so I leapt from couch to chair, chair to end table, end table to recliner, and then hopped down once very quickly to the area rug (which was a flat rock amidst the river of lava) and bounded to the closet in the back corner.

We didn’t have much growing up, but whatever treasures we had always seemed to be kept in a collection of dusty boxes stacked at the back of any one of the many closets in the house. So far, the treasures in the front room closet were far less interesting than what I’d found in my mother’s bedroom closet the weekend before. But that day I dug into the front room closet, and that’s when I found it…a tweed hatbox with tarnished brass clasps. Most of the boxes I’d found so far were of the cardboard variety, so I knew this was going to be good. I dragged it out into the middle of the living room and flipped open the clasps and popped the top off.

And there was my father.

Well, not literally my father, but rather the artifacts that he left behind. A kind of proof of his existence that I’d not come across before. The first thing I noticed was the camera. Silver and black. So many buttons and dials. Strange words and numbers and symbols stamped into the metal.

I turned some dials and pushed some buttons. Click. I pushed the same button again. Nothing. Uh oh. I must have broken it. Though I knew no one else was home, I looked around to make sure there were no witnesses. I was a clumsy, curious boy, so this was not unfamiliar territory. “Step two” was always to hide the evidence, so back in the box it went.

I grabbed the next thing that caught my eye. It was a bulky, heavy, weathered and worn brown envelope, closed with a string wrapped around a cherry red button.

I dumped its contents onto the carpet. Two long, blue, padded boxes. I flipped one open, and…whoa. Real treasure.

There was a military medal. A purple, heart-shaped medallion hung from purple ribbon edged in white. In the center of the medallion was the raised relief of an old man in profile…a uniformed soldier.

I opened the second box and found an identical purple, heart-shaped medallion.

There was a stack of letters in the box, all written in that fancy loopy way that seemed to be a code that grownups used. Boring. Tossed those back in. Next was a stack of black and white photos. Soldiers…older guys with guns. Kinda cool, but…boring. Tossed those back in, closed up the box, put the box back in the closet, and went to my room to study the treasure I’d kept.

I took the medals to school the next day to impress the other kids. It worked. The older kids were so impressed that they knocked me down and took them away from me.

Years later, here I was again, still bored and alone in the same house, staring into the same tweed box, but now it was up here in the attic where I often retreated to get high. Mom must have moved it when her boyfriend moved in for a while a few years ago. I didn’t really recognize the box at first, but when I opened it and saw the camera it all came back to me. The mesmerizing dials with all those strange numbers. The words stamped into the metal made sense to me now. It was a Leica Rangefinder, made in Germany.

By this time, I knew my way around a camera a bit. I inhaled and wondered if it still worked. I wound it and pressed the shutter. Nothing. I wound it again. Click. A good sign. I exhaled a cloud of smoke into the center of the room.

I picked up the stack of black and white photos and shuffled through them again. The men with guns weren’t men after all. They were boys. Boys only a bit older than me, it seemed. Boys in uniform. Wet, muddy boys with weary, forced smiles. Boys with rifles and radios. There was a skinny dark-haired kid again, enormous bandoliers of ammunition slung over his shoulders, the weight seeming to press his boots down into the mud. His face was a little blurry, but familiar. I looked in the mirror that was propped against the wall.

Hmmm. I was a little blurry, too.

This was good weed.

My hair was lighter than the hair of the weary soldier, but yeah, everything else—the forehead, the nose, the jaw.

I looked in the mirror again. We shared the same haunted look, I thought. We shared the same burning desire to be somewhere else—ANYWHERE ELSE. Fear was our clear bond. He also looked so impossibly tired, liked he’d marched well beyond his own capabilities. His tank was dry.

I shuffled through the remaining photos until I saw him again. This time he was a bit cleaned up. His uniform was threadbare, but neat. His arms dangled around the necks of two uniformed buddies. He was sporting that familiar easy grin that I’d grown to love during his sporadic visits over the past few years. I wondered if I would have been able to spot his gold tooth if this had been a color photo. Did he have it back then?

But his eyes…big and black, the corners wrinkled with the smile, staring back through the camera from an outpost in Korea, back through my own eyes and through the back of my head and on and on, searching for some lost thing.

Decades would pass before I recognized the face of PTSD, and by then the boy from the photos would be dead.

I left the attic, the box, the photos, and my father, behind.

I kept the camera. 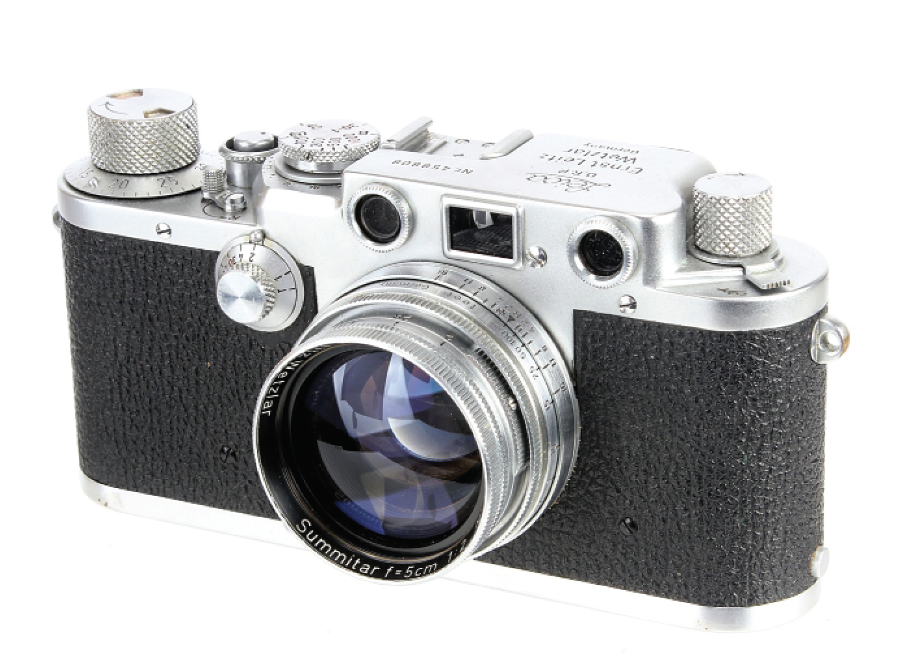